THE INTERNATIONAL CONFERENCE “GLOBAL COOPERATION OF INDEPENDENT, NEUTRAL TURKMENISTAN FOR THE SAKE OF PEACE AND TRUST” WAS HELD IN ASHGABAT

On April 15, 2021, the International Conference “Global Cooperation of Independent, Neutral Turkmenistan for the sake of Peace and Trust” was held in the capital of Turkmenistan, Ashgabat in participationon of the President of Turkmenistan Gurbanguly Berdimuhamedov.

The high-level event took place in the new Conference Centre of Turkmenistan that was officially opened in the same day by the President of Turkmenistan.

The heads and representatives of respected international and regional organizations, including the UN, OSCE, CIS and others took part in the International Conference via videoconferencing.

In his opening speech, the President of Turkmenistan Gurbanguly Berdimuhamedov noted the significance of the given Conference that is taking place in the International Year of Peace and Trust. He expressed firm commitment of Turkmenistan to the development of peaceful, friendly ties between countries and people. The President also called for the expansion of collaboration with the international partners. 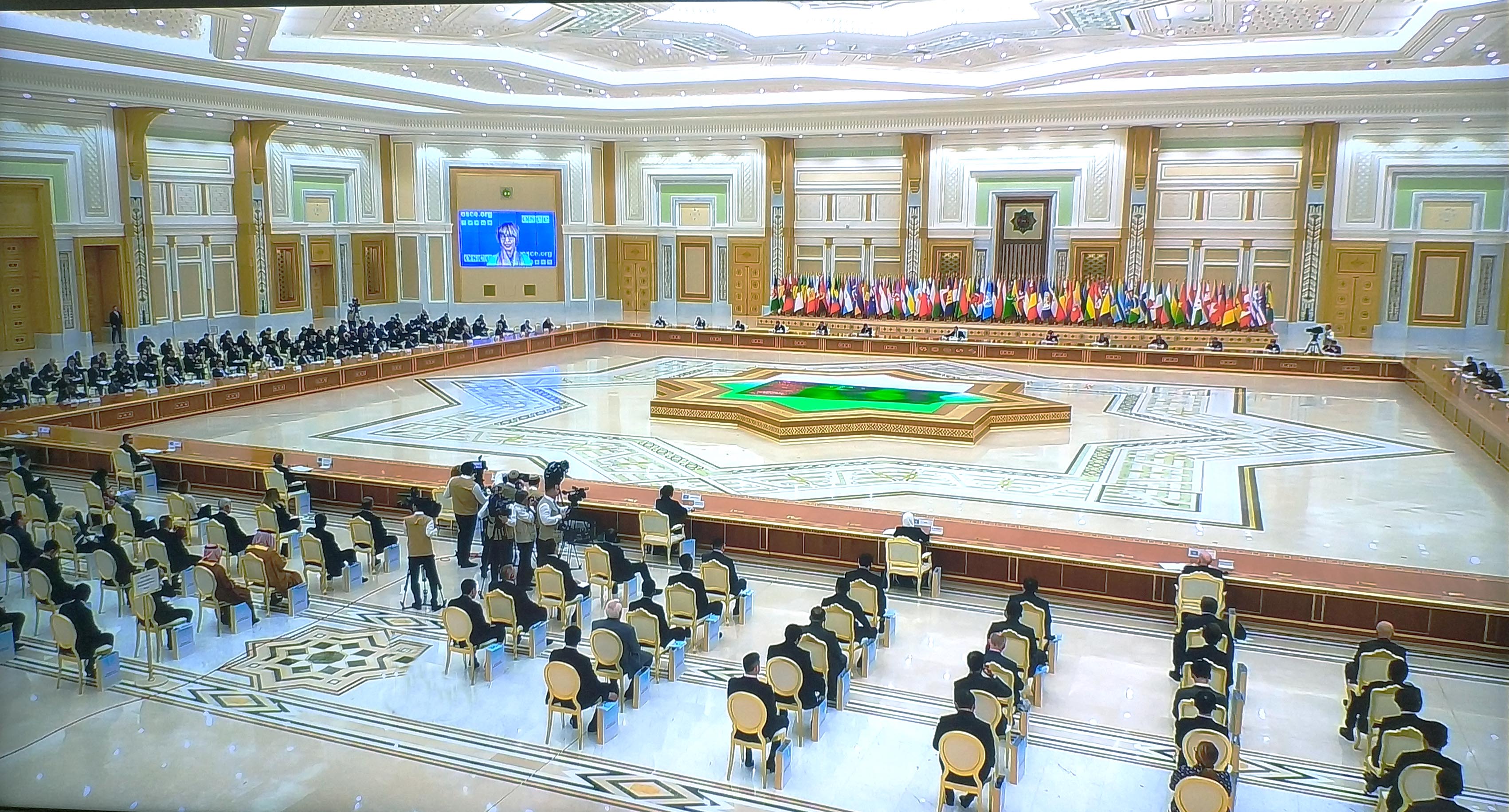 Then the Chairman of the Executive Committee of the Commonwealth of Independent States – Executive Secretary Sergey Lebedev addressed the conference via videoconferencing. He particularly underlined that in the person of Turkmenistan, the international community has gained a reliable and peace-loving partner and the state confirms in practice its vital input in the development of international cooperation on the basis of mutual respect and trust.

Also via videoconferencing gave her speech, the Under-Secretary-General of the United Nations, Executive Secretary of the UN Economic Commission for Europe (UNECE) Olga Algayerova. She noted the important role of Turkmenistan in the promotion of constructive regional and international dialogue, in particular through the collaboration in the area of green economy, trade, transport, ecology and others.

About the significance of peaceful and open international cooperation to which Turkmenistan calls, the Executive Secretary of the UN Economic and Social Commission for Asia and the Pacific (ESCAP), Under-Secretary-General Armida Salsiah Alisjahbana has spoken in her video statement. She underlined the importance of mutual support in the process of resisting the common threats and challenges.

In her speech, the Acting UN Resident Coordinator in Turkmenistan, UNICEF Representative in Turkmenistan Christine Weigand told about the active cooperation of Turkmenistan with the UN from the perspective of attaining the Sustainable Development Goals that is inseparably connected to maintenance of peace and trust between countries and people.

Also, the Ambassador Extraordinary and Plenipotentiary of the Russian Federation to Turkmenistan Aleksandr Blokhin gave a speech at the Conference. The diplomat said that “the peace and trust is what is extremely needed today to the people and states of the whole Globe and their priority scope in the Turkmen foreign policy has gained many practical confirmations and rightly valued by the world community.”

In his speech, the Ambassador Extraordinary and Plenipotentiary of the United States of America to Turkmenistan Matthew Stephen Klimov presented his vision of the notions of peace and trust. He underlined that to attain peace it is necessary to build and maintain trust. The Ambassador added that this is what Turkmenistan is calling for through its positive neutral policy.

Speaking at the Conference, the Head of the OSCE Center in Ashgabat Natalya Drozd stated that by initiating the UN General Assembly Resolution on declaring the International Year of Peace and Trust, “the Government of Turkmenistan has again demonstrated its commitment to the policy of permanent neutrality, the main priorities of which is the affirmation of the culture of dialogue and reinforcement of mutual trust between various states.”

The Ambassador Extraordinary and Plenipotentiary of the European Union to Turkmenistan Diego Ruiz Alonso also spoke at the Conference. The diplomat noted the role of Turkmenistan in the promotion of peaceful and trustful relations between countries and people that is reflected in numerous projects of economic and humanitarian nature.

In the end of the official part of the Conference, the President of Turkmenistan Gurbanguly Berdimuhamedov expressed gratitude to participants for active involvement and wished to all peace and wellbeing.

Then the ceremony of signing international documents took place and the International Conference continued in plenary sessions.

MFA OF TURKMENISTAN TOGETHER WITH THE EMBASSY OF THE USA ORGANIZED THE...

KEY ASPECTS OF TURKMEN-UZBEK RELATIONS DISCUSSED DURING THE TELEPHONE...

MEETING WITH THE HEAD OF THE OSCE CENTER IN ASHGABAT WAS HELD IN THE M...

MINISTER OF FOREIGN AFFAIRS RECEIVED THE AMBASSADOR OF UKRAINE TO TURK...

MINISTERS OF FOREIGN AFFAIRS OF TURKMENISTAN AND THE KYRGYZ REPUBLIC D...